JEDDAH – The new King Abdulaziz International Airport (KAIA) will have the soft opening on Tuesday with the landing of a domestic flight from Al-Qurayyat.

The airport will start full domestic and international services by the beginning of 2019. 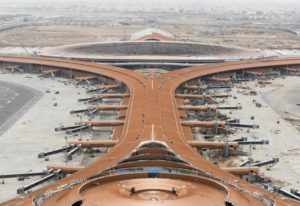 This was announced in a meeting attended by Prince Khaled Al-Faisal, emir of Makkah and adviser to Custodian of the Two Holy Mosques; Prince Abdullah Bin Bandar, deputy emir of Makkah; Minister of Transport Nabeel Al-Amoudi, and Abdul Hakeem Al-Tamimi, president of the General Authority of Civil Aviation (GACA) at the emir’s office in Jeddah.

During the first week of experimental operation starting from May 29, there will be a few flight services handled through two gates and it will be increased and handled through six gates in the second week.

The operations will be handled through 11 and 17 gates in August and September respectively.

Located 19 km north of the Jeddah city, the airport is regarded as a world-class iconic and high-tech gateway to the Two Holy Mosques.

The KAIA, one of the largest aviation hubs in the world, will be a smart, environment-friendly, unique landmark of the Arab and Islamic architecture.

The Haramain High Speed Train Project management announced on Monday that Saudi citizens can take advantage of free trip on board the train during the ongoing experimental operation.

Saudi men and women above the age of 18 can register for free tickets for weekend travel between Madinah and Makkah, according to Rumaih Al-Rumaih, president of Public Transport Authority and acting president of Saudi Railway Organization.

He said that this trip was organized as part of gathering feedback and suggestions from Saudi citizens.

The free trips for Saudis will be organized every weekend from Madinah to Makkah all through the experimental operation period from June 1 until the beginning of commercial operation slated for September this year.

Muhammad Fida, director general of the project, said that free tickets can be obtained from a special counter at Noor Mall in Madinah from May 30 onwards and details about ticket counters in Makkah and Jeddah will be announced shortly.

For any Relocation and immigration services in Saudi Arabia, Please contact us on https://helpxpat.com

Did you check your phone today? Network names changed? Here’s why…